This is the first post in a blog series Titled “How to build your own solar system, for the beginner on a small budget.’

This series is for the person who wants to move off-grid in a small living space such as a cabin, tiny home, RV, Skoolie, camper or truck camper, etc. and, as a novice without a lot of money, wants to produce their own electricity through a small and simple solar system that is easy to use and maintain.

If this describes you, then follow along as I take you through the basics of solar energy in a step by step fashion and walk you through the basic fundamentals, design, and installation process in a simple and easy to follow format designed specifically for the beginner. My goal is to show you how to design and install a solar system that meets your basic living needs in an off-grid lifestyle.

If you would like to be notified when each module of this series is released just fill out the information below.

How efficient is solar energy?

The sun as a source for energy

The most powerful aspect of solar energy is the massive amount of energy that reaches the earth’s surface. According to the University of Tennessee Institute of agriculture, 1 square meter at sea level will be bombarded with 1000 watts of energy from the sun on a sunny day. That’s a lot of energy, and the sun isn’t going anywhere anytime soon. So, in regards to efficiency, the sun itself is extremely efficient.

The downsides to using the sun as a source for energy are obvious. First, not every day is sunny and a long stretch of cloudy days can severely lower our ability to produce electricity. Finally, the sun doesn’t shine 24 hours a day.

The current efficiency of the photovoltaic cell

At the time of publication of this information the highest efficiency rate of photovoltaic cells is as follows in the chart below.

This information is credited to https://www.cleanenergyreviews.info/blog/most-efficient-solar-panels

This represents a 20% difference in efficiency respectively between the panels, but in the larger picture of a photovoltaic solar system as a whole, when taking the cost of the solar panels into account, the difference isn’t worth the cost unless you have a larger budget to work with. That being said, the cost isn’t the only factor when customizing a system.

A more efficient panel is smaller. If space is a consideration in your situation then a more compact panel may be worth the extra cost. We will go into greater detail about this in Later posts.

The efficiency of solar system components

The efficiency of solar panels is not the only thing to consider in your solar system. The other components all have their own efficiency levels also. The charge controller, inverter, and battery bank all need to be considered.

In a perfect world where money was no object, we would just install the most efficient component at every stage of the design, but this Blog series is dealing specifically with a low budget and simplified system. We will have to be choosy about where we spend our money to gain efficiency.

PWM stands for Pulse Width Modulation. PWM charge controllers have an efficiency rating of 75% to 85%. For a small solar system where battery voltage and solar array voltage are equal, a PWM will work well and can be an area where the DIY solar design can save some money.

The Inverter will convert DC electricity to AC electricity. The difference between DC and AC electricity will be discussed in chapter 5. For our discussion here just know that AC electricity is what almost all household appliances use. The simplest solar system designs do not require an inverter. More on this later.

It isn’t possible to convert DC electricity to AC electricity without losing some power due to heat that is produced in the process (this is similar to friction). Efficiency ratings for inverters are somewhat complex because they are affected by the Load or the amount of power being consumed at any given time. Because of this, the efficiency of an inverter can vary throughout the day where efficiency is typically highest at around 80% of maximum load, but every inverter is different. When choosing an inverter it is very important to choose the right one for the specific parameters of your system design in order to maximize the efficiency of a particular inverter.

Inverters are either PURE SINE WAVE or MODIFIED SINE WAVE. Their differences and which one you should choose will be discussed in more detail in chapters 14 and 15.

There are four main types of batteries for solar use. Lead Acid, Lithium-Ion, NICAD, and Gel. To be honest it’s not really worth going into all the different types because for small, budget-friendly solar systems AGM/Lead Acid batteries are the only reasonable choice. We will go into more detail about the different kinds of AGM batteries in chapter 17.

The efficiency of system design

The most important aspect of efficiency is the system design as a whole. Every system will be different based on the particular energy needs being met by the system. There are many variables to consider even for a small solar system. I will walk you through each step in determining which variables will have priority in your system and help you design your system based on those priorities. In a small budget-friendly system compromises will have to be made, but with the help of this blog series, you will know which compromises to make.

Why should I choose solar?

When it comes to small off-grid residential energy production systems, there are three choices. You can go with solar, wind or hydro. All of these choices are good and each has specific advantages, but solar is the one to go with if you’re a beginner and you’re on a small budget. Wind is more expensive by around 35% more expensive and has a substantially higher degree of difficulty because of the installation process. Hydro can be about the same price with only a slightly higher degree of difficulty, but it requires a year-round water source in close proximity to your living structure.

Solar on the other hand is the least expensive of the three because large amounts of cooperate and government money has been poured into decades of research and development. Solar is also fairly simple for the DIY’er to install with some guidance. Solar is also the easiest to expand if your energy needs grow.

For these reasons, I’ve written this series. I want to help people gain the confidence to tackle a solar project and finally realize their dream of living a simpler life off the grid.

If you would like to be notified when each module of this series is released just fill out the information below. 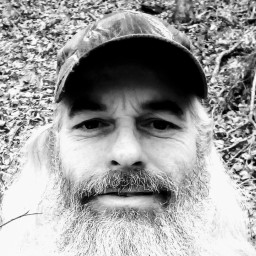 My wife and I have lived off-grid since 2013. We moved onto a raw piece of land and began building our off-grid homestead. Almost everything we did was a DIY project. The purpose of this blog is to share what we learned along the way.